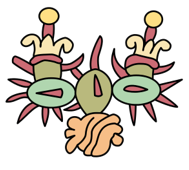 The Route of Commerce and Tribute is intended to give visitors an idea of the scale and continuing tradition of commerce and trade within the ancient Valley of Mexico.

The Aztec Empire was supported by a network of tributary and subject states, peoples, and cities. Even long before the arrival of the Spanish, many of these peoples were long accustomed to resisting - and acquiescing - to the dominant powers in the region. What we call the Aztec Empire was the result of a Triple Alliance between the powers of ancient Tenochtitlan, Texcoco, and Tlacopan, today's Tacuba.

Your journey is through the lifestyles, customs, traditions, production, marketing, and consumption of some of what they lived on. Who can imagine the world without chocolate and tomatoes?

This is the culture that first presented them to the world. The Route of Commerce & Tribute is a trip into that past.

The Fountain of Nezahualcoyotl in Chapultepec