Ariosto Otero Reyes is among the most recognized Mexican muralists of the 20th and 21st centuries. He's best known in Mexico, and especially in Mexico City. His work has been well-received in Argentina, Colombia, Paraguay, Guatemala, too.

His first public mural was painted at the Municipal Palace of Amecameca, in Mexico State in 1980. He completed another in the same year at the San Carlos Academy. Since then, his work has appeared all over. This is  especially true across the south and west of Mexico City. His work appears in four different stations of the Mexico City Metro.

In the artist's own words:

Muralism is an expression through which awareness is created in all fields, and from it, ideas can emerge to stop a new holocaust. The muralists of today must take into account and with more force, the events that have come to pass. The cold war is over, but the aggression of the economy and the exploitation of man by man is a shady method that is creating a new slavery.

The listings below are intended to help you find more of his works. They're in and around the city. 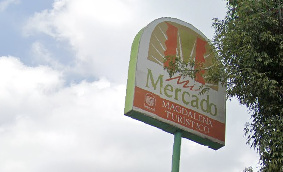