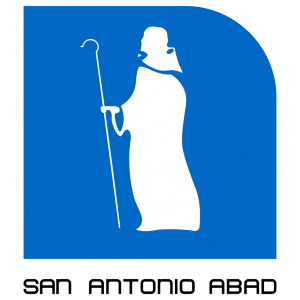 Metro San Antonio Abad is the first surface level station on Metro Line 2 after downtown. It is also the last surface level station for those traveling north in the other direction.  It is an important station for a large number of government and judicial buildings, almost like those at Metro Niños Heroes, which is about a 25-minute walk almost directly west (you’ll cross Metro Line 8 on the way).

This station takes its name from the Calzada San Antonio Abad which is the first stretch of the longer Calzada de Tlalpan. The calzada received its name from the old temple and hospital of San Antonio Abad. The 17th-century main building (some parts are from the 16th century) is not open to the public. It began as a small hermitage in 1530. The followers of St. Anthony took over in 1628 and started the hospital. Their monastery and hospital lasted until 1789. Thereafter, the building was used as a textile factory. Industry, even today, although in very small numbers, prevails throughout the area.

Saint Anthony Abad (251-356 CE) is considered the founder of the hermitage movement. His followers lead lives of Christian piety with little or no possessions and often almost no contact with the outside world.

Metro San Antonio Abad is not often visited by international visitors. In addition to the gigantic former monastery of San Antonio Abad, there are a number of sites worth mentioning. The Gala commercial printing press, over 100 years old, is located just outside the station. Gala is generally credited with printing most of the calendars used in Latin America for much of its history. Santa Cruz Acatlán in the Transito neighborhood is a bit further north, but worth a look.

The heart of la Magdalena, the market's a great place to eat in a classic mountain town.

As park's go, few are as dramatically set-off by a single mural like this one.

Metro La Raza has been defined, like its entire neighborhood, by a curious monument just to the south.

One of the busiest stations on the old Tlalpan Causeway, Xola can teach you a thing or two.

One of the most often mentioned of the city's gourmet markets, this one is bedecked in outstanding murals.

A fantastic double-corridored market makes up for size with class and history...

A market dedicated to the fallen in San Ángel...

Famous and historic Santa Fé has a terrific place for lunch...

One of Álvaro Obregón's least international of markets is a paradise of food...