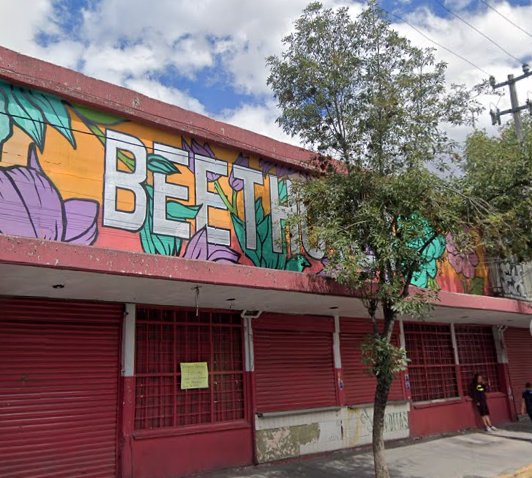 The Mercado Beethoven is one of two markets that mark the eastern and western edges of the Peralvillo neighborhood. On the western side, it’s the Mercado San Joaquin. Here on the east, streets are named for classical composers and musicians, so the market is among the streets of Wagner, Calle Verde, Bellini, and Mozart. Adelina Patti (1843–1919) was an Italian opera singer. The street along the market’s east side is named for her.

The colonia Peralvillo corresponds to the ancient Tlatelolco neighborhood of Atenantitech. In the early colonial period it became known as Santa Ana Atenantitech. That parish is today remembered at the Plaza Santa Ana on the other side of Tlatelolco. There’s no good record of when it became Peralvillo, but by the late 16th century it was already referred to as the Llanos de Peralvillo (Plains of Peralvillo). The area grew up, mostly poor and indigenous, along the Camino Real del Tierra Adentro. In the 18th century, traffic and trade were sufficient to warrant the Garita de Peralvillo, a sort of customs house. Today it’s the Indigenous Peoples Museum.

The market may be the only one honored with a Metrobús station. Metrobús Mercado Beethoven is on the 7 Line which travels from the Calzada de Misterios along nearly the entire length of Paseo de la Reforma.

A 2017 UAM study counted a whopping 798 vendors in and around the market. That makes it easily one of the biggest in the area. Among that number, there are a good number of eateries. They’re all cooking fresh every day. And you’re quite likely to be eating better than you thought possible, at considerable savings over restaurants. (You can get tips on eating at any Mexico City market here.)

A good one to watch for contemporary art from young and emerging artists...