The Guadalupe Chapel in Peñón de los baños is a very old chapel, recently restored. Badly damaged in the 2017 earthquake, today the 18th century altarpiece, in particular, is well worth stopping in to see.

Peñón de los baños is a very well-known neighborhood, and one of just two original settlements in Venustiano Carranza. Quite near the airport, it’s a perfectly appropriate airport getaway, too. Travelers looking for a daytime bath or shower will also find it convenient. The ancient nobility of Tenochtitlan used the medicinal baths here, especially after childbirth. 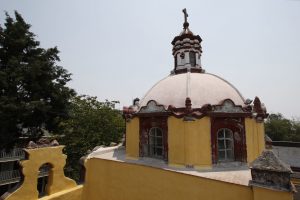 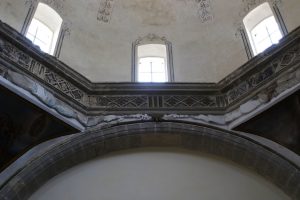 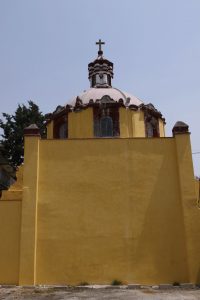 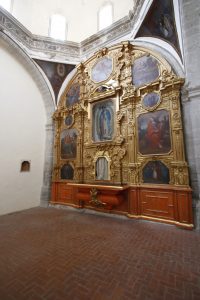 The Chapel of Our Lady of Guadalupe is a private church. Although mineral baths here date from well before the Spanish invasion, this chapel dates only to 1765. The baths were famously visited by Alexander von Humboldt in 1803. That visited was followed by a 19th century seemingly full of high-profile visitors.

Prior to that, it had been an important recreational area during the colonial period. The original chapel façade is flanked by two small bell towers with the octagonal dome above. The interior altarpiece is from the 18th century. The main façade, facing north, shares a central garden with corridors leading off to the Peñón Medicinal Baths. By the beginning of the 20th century, it was still a popular site, supporting a large hotel, dance hall, and bowling alley.

The Guadalupe Chapel was abandoned soon after. It was only protected in the 1930s. Soon after, the baths again reopened and the Chapel was protected along with the other facility. Much of it was restored in 2020 with INAH support.