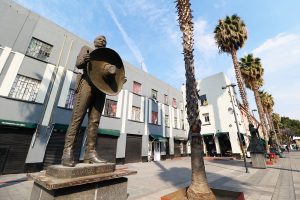 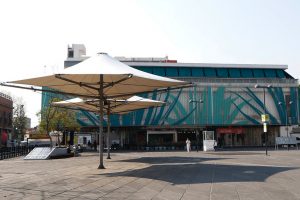 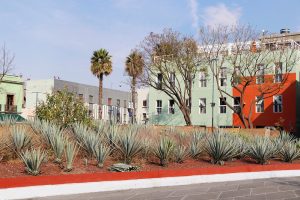 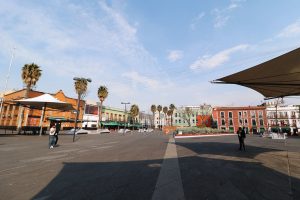 The Plaza Garibaldi, perhaps above all other plazas in Mexico City, can’t be done justice in any single photograph.

It’s an essential stop for a certain kind of Mexico City trip. The stereotypical tale in Mexican lore has one arriving here in the wee hours, or at least after 12. One must be prepared with above one’s limit in alcohol. That’s to say, one is expected to arrive drunk. At last lubricated on spirits, one may lament one’s losses, betrayals, and heartaches, especially as related to love. An appropriate musician will facilitate the operation for a few pesos.

Of course, it helps to know the words, and very few international visitors will know many of these songs. Your Mexican friends may assist you in explaining or translating some. But they will agree that they cannot translate the depth and meaning and of loss.

For anyone, anytime of year, and frankly, around the clock, Garibaldi is a treat. And it’s one of the most visited spots in the City by international visitors.

Plaza Garibaldi is at the confluence of the neighborhoods of the Centro Histórico, Colonia Guerrero to the west, and La Lagunilla and Tepito to the north and east.

The square used to be known as the Plazuela de Jardín. The name changed in 1871 to Plaza del Baratillo for a giant street market that occupied the square and the surrounding streets. The name was changed again in 1921 to honor the grandson of Giuseppe Garibaldi. José “Peppino” Garibaldi, had fought just ten years earlier in 1911 with the Madero forces in Chihuahua, during the Mexican Revolution.

According to legend, in about 1923, a cantina called Salón Tenampa opened under the direction of a merchant who’d arrived from Cocula, Jalisco. He hired the “Mariachi Coculense” to perform at the cantina. The plaza has, since then, been a hotbed of traditional and popular music for people from these smaller Mexican towns. There’s always been a particular inclination toward the state of Jalisco due to these origins. The newer Tequila Museum being but one more recent example.

Over the decades, the plaza has seen waves of nightspots come and go. From the Golden Era of the 1930s to the 1950s, it was a hotbed of old-school dance halls and pavilions. Many of these have survived in one form or another on the surrounding streets. And many continue to throb, beyond the plaza on the Calle República de Honduras.

The Mercado San Camilito, on the north side of the square, is one of the few public markets open 24 hours. If you pop in late, notice the food, here too, leans toward Jalisco fare.

One of the least well-known of the many traffic roundabouts on Paseo de la Reforma.

Not one to be missed, the Plaza has a raucous party going, nearly every night, and daytimes too.

One of the least well-known of the many traffic roundabouts on Paseo de la Reforma.