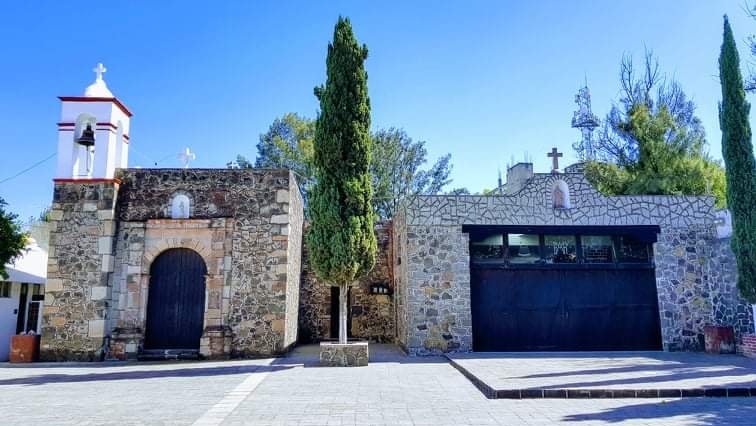 The Chimalcoyoc village, one of the 12 pueblos originarios in Tlalpan, is a surprisingly quiet and close neighborhood. It’s just under and essentially all around the big highway interchange that leads to the Cuernavaca highway. But with its cobblestones and quiet treelined streets, you might not know it. While the highway has definitely affected the town, it’s surprisingly easy to avoid once your in the town.

The name comes from a combination of the Nahuatl words chimalli meaning “shield” and coyotl means “coyote. It can be translated as “Shield of the Coyote.” The town was founded in 1532 and named the Barrio de la Asunción. It was long known simply as “la Asunción,” and it was a barrio of the larger city of San Agustín de las Cuevas. It remained under this name until 1854 when the patron saint was changed to the Virgin of the Immaculate Conception. During the revolution the town, which at the time included just 14 houses, was repeatedly looted. Some religious was never returned to the church, and the roof remained collapsed until 1927.

The town is perhaps best-known for hosting the Roadworkers Monument. It was placed in 1956 to honor the roadworkers after the construction of the highway to Cuernavaca. The town chapel (pictured) is dedicated to the Immaculate conception. The small graveyard to one side and behind the chapel has been closed to new interments for many year.

Chimalcoyoc is generally thought of as the first of the towns of the Ajusco mountains. Lots of international visitors will pass through on their way to the Cumbres del Ajusco National Park. The town still celebrates the Feast of the Immaculate Conception on December 8. This can grow into quite a street fair with traditional dances, music, and fireworks.

One of the main roads through the town is Calle de Rosal and it leads directly to the neighboring town of San Pedro Martír to the south. Just to the north are the many attractions of the Tlalpan Centro.

The Museum of Time in Tlalpan

One of the Friendship Route's most recognizable freestanding works...

The Museum of Time in Tlalpan

A Czech sculptor's interpretation of the ancient Greek Graces...