El Batán Parque Ecológico is an ecological park in the south of Mexico City. Home to the last monumental work of artist Diego Rivera, the park’s history is more curious than most visitors will ever know. At 41,575 square meters, it’s quite large and maintains tremendous variety of trees. Among them are Ginko biloba, Italian cypress, jacaranda, Indian laurel, Chinese elm, weeping laurel, astronomical, avocado and Brazilian guava, among others.

The Batán began as part of the Hacienda Batán which came to belong to the Matsumoto family. Tatsugoro Matsumoto had settled in Mexico in 1896. During the Porfiriato, he’d designed the gardens surrounding the Chapultepec castle and was soon the leading landscape gardener in the country. He’s also well known for having designed the Japanese Tea Garden beneath the Golden Gate Bridge in San Francisco, California. He eventually purchased the Hacienda Batán on the edge of the Pedregal area but within the textile region of Magdalena Contreras. The Hacienda headquarters was on the site of the famous Unidad Independencia housing complex, just on the other side of the Periferico highway.

By the 1930s, he’d been hired to plant cherry trees in imitation of those planted in 1912 in Washington D.C. The order came from the administration of President Pascual Ortiz Rubio who was president from 1930 to 1932. Matsumoto found the climate not so friendly to the Japanese-style cherry trees, and instead planted jacaranda trees. This explains the presence of Brazilian jacaranda trees all over Mexico City even to this day.

The property remained a gardening and food distribution point for interred Japanese-Mexicans until after the war finally ended in 1945. It was then briefly owned by the brother of the president of Mexico, Manuel Ávila Camacho (1940-1946). By 1953, the entire property was sold to Dolores Olmedo, a self-made businesswoman widely known as an art patron and collector. (Her former home is a museum too.) 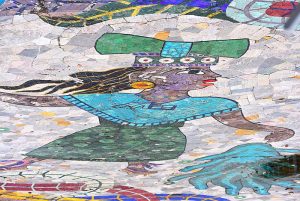 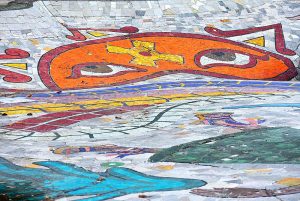 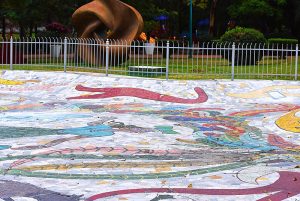 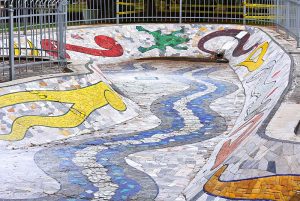 The Mirror of the Star

This then explains the presence of the final monumental work of Diego Rivera on the grounds of the park. “El Espejo la Estrella,” (The Mirror of the Star) was completed over a few months in 1956. The work is a mosaic in thousands of pieces of marble, onyx, and mother of pearl. 165 figures representing ancient gods and frogs, snails, turtles, dogs, and others. When filled with water, it also serves as a reflection pool.

With the death of Diego Rivera, in November of 1957, it’s not recorded what was happening with Olmedo. (She died in 2002.) But taxes were owed on the now resplendent property. Mexico’s National Bank of Public Services and Works (Banco Nacional de Obras y Servicios Públicos – Banobras) acquired the property and created El Parque del Federalismo.

It remained such until the name was changed back to the name of the old ranch in 1988. And it’s been El Batán Parque Ecológico ever since.

Plaza San Jacinto is among the most heavily trafficked Saturday artisan and fine arts markets.

A remarkable Baroque challenges everything you've believed about the style, a 1620s hermitage remains jaw dropping.

Plaza San Jacinto is among the most heavily trafficked Saturday artisan and fine arts markets.

One of Mexico City's most fascinating parks helps explain the famous Jacaranda trees all over the City.

A remarkable Baroque challenges everything you've believed about the style, a 1620s hermitage remains jaw dropping.