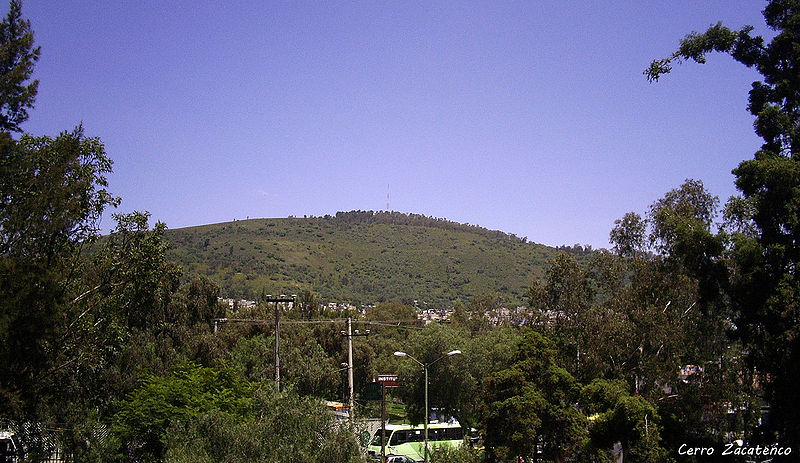 The Cerro de Zacatenco can’t really be given justice in a couple of paragraphs. Marking just about the inner elbow of L-shaped Gustavo A. Madero, it’s a mythical place. Surrounded by ancient archaeological finds and discoveries, it likely still holds a number of secrets.

The northeastern edge of the hill is in San Juan Ixhuatepec, in Tlalnepantla in Mexico State. The area is densely populated on virtually all sides. And like the rest of the Sierra de Guadalupe, it’s part of the northernmost reaches of Mexico City. To the south, the mountain slowly gives way to the Cerro de Tepeyac and the national park, with Santa Isabel Tola to the immedate east.

The entire Sierra de Guadalupe is part of the Neovolcanic Axis. That explains the presence, not just of the crux of mountains but of these small monogenetic volcanos. Many of them stand in Mexico City itself, and across the Trans-Mexican Volcanic Belt, which crosses the center of the country from coast to coast.

The Nahuatl name translates to “edge of the grass” referring especially to the forage grasses that still grow here. Today, the name is lent to the town of San Pedro Zacatenco.But even more so, the giant campus of the National Politechnical University borrrows it. It’s usually referred to simply as “Zacatenco” to distinguish this campus from the original campus at Casco de Santo Tomas near Metro Normal. Indeed, from Cablebus Line 1, the Cerro de Zacatenco, and the campus, are practically the most spectacular sights between the first and seconds stations.

Among the southern peaks of the renowned Sierra de Guadalupe...

The Ticomán Cablebús station is just the first stop on your way up to the very north of Mexico City.

Your first stop on the Cablebús adventure of the north...

The ancient leaders of Tenochtitlan are still well worth looking into. Here's a first glimpse at how they got there

New life arrives in one of original villages of la GAM, far in the north of Mexico City.

The transfer station for passengers en route to the final two destinations on Cablebús Line 1.

CablebúsLine One can leave you at the base of the famous Cerro del Chiquihuite...

The Ticomán Cablebús station is just the first stop on your way up to the very north of Mexico City.