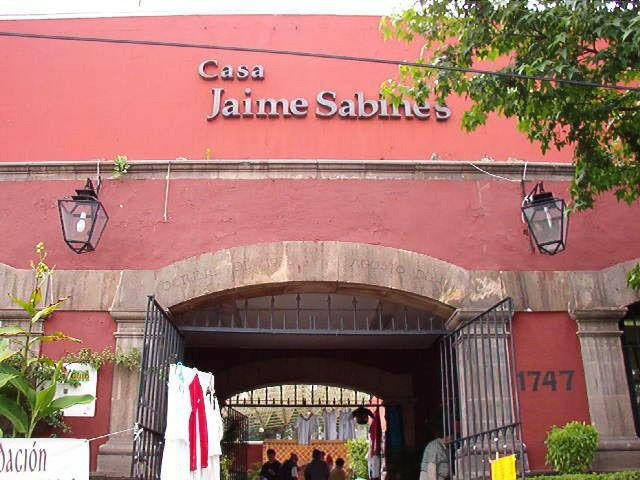 The finest words of love are between two people who say nothing.
– Jaime Sabines

The Galeria Adan art gallery is inside the Casa Jaime Sabines cultural center. One of two permanent halls within the center, exhibitions cover a broad range of the topics, most often in painting and photography. The gallery also hosts book presentations, chamber music concerts and similar smaller events.

The building housing today’s cultural center was part of the 17th-century Carmelite monastery just across the avenue. In fact, this building was part of a very large cistern and waterworks that collected water from the nearby Magdalena River.

The considerable complex was designed and built in 1615 by Fray Andrés de San Miguel (who designed the rest of the monastery). The significant waterworks was needed to draw water for the renowned Carmelite orchards that once covered the entirety of the neighborhood of Chimalistac to the east. In 1790, a deambulatorio was added around the cistern and a portico of five arches were added. These make up the main facade of the building today.

The complex was still drawing water at the end of the 19th century. Between the 1930s and 40s the cistern was again remodeled and in 1935 it was taken over by the Mexico City department of water.

In 1972 the site was declared a part of the city’s historical heritage. In the 1980s, a second floor was added. Finally in 1996, it’s current name, Casa de la Cultura Jaime Sabines was added.

Jaime Sabines Gutiérrez  was born on March 25, 1926, in Tuxtla Gutiérrez, Chiapas. He came to be one of the country’s most famous poets after studying philosophy and letters at the National Autonomous University of Mexico. His ten volumes of poetry have been translated into more than twelve languages. He’s best known for chronicling the experiences of everyday people.

A private collection covering the occult, Tarot, and a dozen more arcane topics...

Stark and vibrating as good historical monuments should, Chimalistac's old stone bridges are just the centerpiece of a fantastic neighborhood.

A gnarly stone chapel in one of the City's favorite secret neighborhoods, don't miss Saint Sebastian's in Chimalistac.