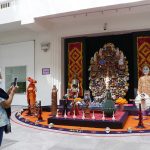 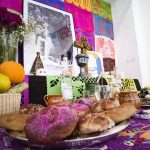 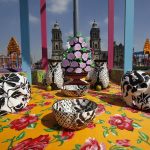 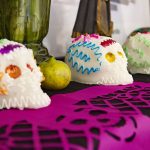 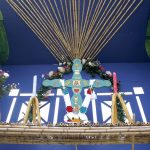 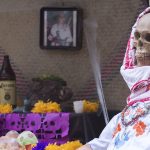 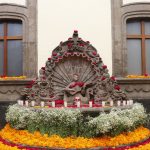 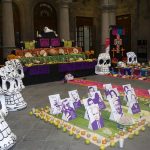 The placement of an ofrenda, the “altars to the dead” seen throughout central Mexico during this season, is one of the most important ceremonies of the Day of the Dead rite. Several days in advance, people make  preparations by purchasing whatever is used to honor the dead.

While the ofrendas are being set up, family and friends of the deceased will chat, pray, and recount events in the lives of those in whose honor the ofrenda is being placed.

The basic components that give meaning to the ofrendar are as follows:

Water. Ancient Mesoamericans considered it an element of life. They offered it to mitigate thirst because it was believed that the dead arrived thirsty after their long journey. Today, it also provides a sense of purification.

Bread. This is a fraternal food offered to friends, siblings. In ancient times, wheat was unknown, but food was offered with ubiquitous corn, including “gorditas.”

Today, many people still make their own bread to be included in the ofrenda. Generally, this is baked in two forms:

In addition to the bread, the ofrenda will usually include the following:

Salt. An element of purification, salt prevents the corruption of the body.

Candles. During the ancient period, ocote was burned as an offering to the dead. Until fairly recently it was still burned in the entrance areas of homes in the absence of wax candles. Today, candles are placed and the light they radiate means that there is faith and hope that the dead will follow the right path. In  cemeteries, candles also serve to illuminate a return to the afterlife for the dead who’ve come to greet us.

Cempasúchil and other Flowers. Flowers serve as symbols of love, gratitude, and friendship. White flowers are offered for children because they signify youth and purity. The cempasúchil (marigold) has a longer history and reminds us that the god, Tonatiuh is associated with the “noonday sun.” In legend, the marigold was presented to mortals at the request of the god Tenoch who saddened by the numbers of dead after the fall of Tenochtitlan. Attentive to Tenoch’s request, Tonatiuh covered the fields in the the golden flowers.

Toys. During the ancient period, the dead were buried with their possessions so that they might use them on their journey to the afterlife. They were often also buried with a dog, “izcuintle” who assisted them in crossing the mighty river that led to Mictlan, the underworld. Clay dog toys are often included and children are still sometimes buried with similar clay figures.

Incense. Incense is intended as the fragrance of reverence. It was used to worship rulers and to ward off evil spirits. Today, incense is used to elevate prayer, and to transmit the intentions, songs, and prayers through the copal smoke to the departed.

The petate. The petate is a mat or rug that serves as a placesetting for the entire altar. It symbolizes the shroud of death but also can be part of the table where the ofrenda takes shape. Today it also symbolizes a place where the souls of the deceased share drinks, food, and festivity.

All of this is complemented by sweets, tobacco, tequila, and mezcal and anything the deceased enjoyed when they were alive. Seasonal fruits can include oranges, cane, apples, and even full meals like  michmole, mole, and chili tamales.

One of the most ephemeral of Reforma roundabouts, La Palma is likely to make any list of favorites.