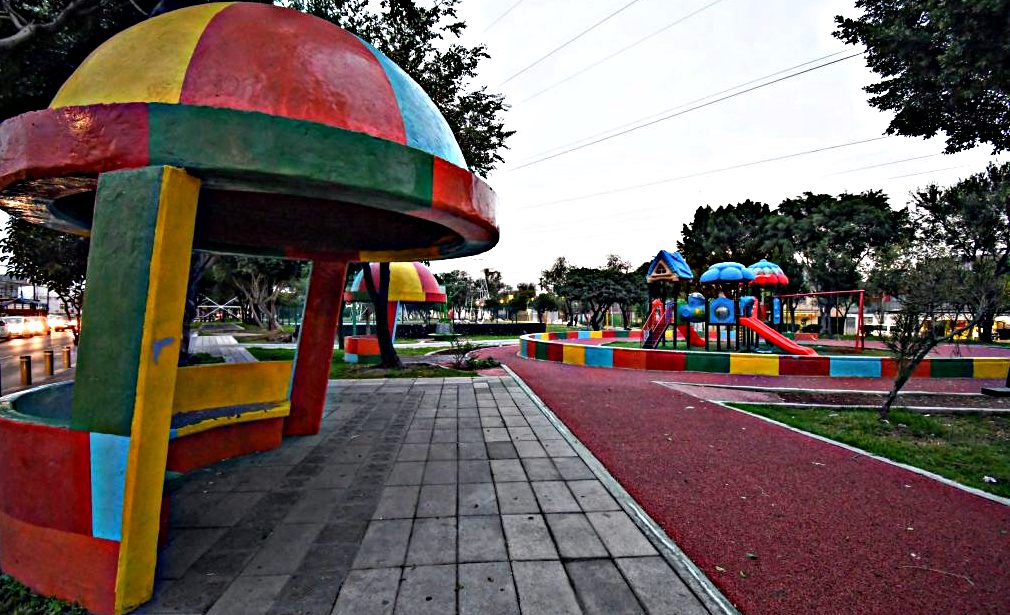 The Parque Eje 6 resulted from a major 2021 re-naturalization project focused on a traffic corridor in Iztapalapa.  A much smaller Jalisco Park predated the current project. It was mostly known for the odd concrete-parasol benches, pictured above. These have been preserved. Painted and repainted for decades, they’re the stuff of childhood legend. Even some adults who’ve never been to the park will swear they remember them from…  somewhere.

But the larger project took into account the entire corridor, and not just the small central park. Dominated by the overhead powerlines, the land underneath had eventually become a string of smaller parks. Together they formed a neglected central median to Eje 6 Sur, here called Avenida Jalisco. Today, the reworked recreation area includes extensive green areas and gardens. There are also:

The reworked Parque Eje 6 Sur reclaimed a public area for some 200,000 Mexico City residents. They hail especially from the Colonia Guadalupe del Moral. The neighborhood market is just a five-minute walk directly north from the middle of the park. Residents also got some 1,000 trees, shrubs and plants. The reclamation project replaced all the signs and benches and improved lighting around jogging and walking trails.  The park is northeast of the Historic Center of Iztapalapa.

The park is increasingly important as an educational space, and for astronomical observations.

The real brain center of the Sierra de Santa Catarina...