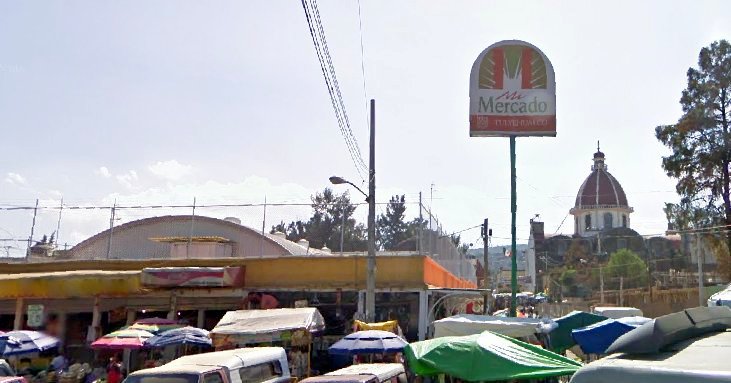 The Mercado Tulyehualco is the neighborhood market, and town center, of Santiago Tulyehualco. It’s also the fixed center of a giant tianguis, a street market.

The tianguis fluctuates and flows with the two giant fairs for which the town is famous. That of “Alegría y el Olivo” (Amaranth & Olives) is held annually in early February. The even bigger Feria de Nieve, (Ice Cream & Sorbet Festival) is held each year in April. Both fairs are enormous, and take over most of the town center. They also leave behind remnants such as businesses that now sell the colorful nieves and alegrías all year-round.

The market was an early attempt to fix locations for many of these smaller vendors. A 2017 UAM studied counted some 119 vendors within the market proper. But that number should be taken with a grain of salt, as vendors come and go, and stalls are subdivided and combined.

Among all of them are many who are preparing ready-made food. The result is a market that’s also a very good destination for lunch. There simply aren’t any ingredients more fresh. Anywhere. And the town market is always pleased to have outside visitors.

The Mercado Tulyehualco is just to the north of the Santiago Apóstol Church and atrium complex. It’s also just to the south of the Los Pajaros Caídos Park with the Stone Arch.

Lake of the Aztec Kings

One of Xochimilco's classic neighborhood markets...

Atlapulco's farm-fresh market is practically on the chinampas...

A teeming hive of commerce, culture, and food, it's a spectacular place for lunch and more.

The thriving center of one of Xochimilco's ancient original villages.

A most spellbinding exhibition of plants and flowers, the Cuemanco Market is wide open and always worth popping in.

Lake of the Aztec Kings

One of Xochimilco's most important distribution centers for plants and flowers...

Public markets are all over the city, but a giant public flower market makes for a real trip to heaven.

One of the most inviting in the whole of La Meche, it's the Merced Flower Market

Most famous for ongoing annual celebrations, Santa Rosa is a tribute to being away from it all...