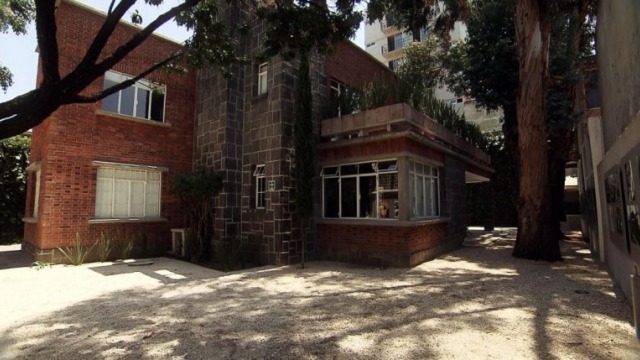 The Museo Casa Luis Buñuel is the former home of Spanish filmmaker, Luis Buñuel. Today, the house is well-preserved in a small enclosure in the Del Valle neighborhood. It stands out in the neighborhood, with its reddish walls and architecture designed by the architect Arturo Sáenz de la Calzada, a Spanish exile like Buñuel himself.

This house is said to have been the one where Buñuel lived the longest. Buñuel arrived in Mexico already famous for the film he’d made with Salvador Dalí in 1929. Buñuel’s later success began with Los Olvidados (1950), and he went on to make more than a dozen films. He stayed from 1946 until his death in 1983.

When the home was converted into a museum, it failed due to poor attendance.  Soon after it was purchased by the Spanish government who, in cooperation with the National Autonomous University of Mexico (UNAM), reopened it as a more multi-disciplinary institution. Inside, fans will find some personal belongings, original scripts, press clippings and photographs.

UNAM together with the Ministry of Culture in Spain welcomes artists, researchers, academics and professionals of art and culture from around Latin America. The Museo Casa Luis Buñuel offers accommodation to foreign artists, but also offers a workplace for the creative process of many Mexican filmmakers.

Courses, workshops, screenings, and meetings are organized to discuss, analyze, and reflect on the audiovisual arts within Mexico City, and other parts of the world.

Appointments are necessary for visits.