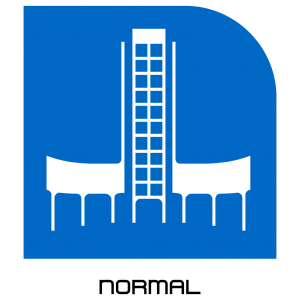 Metro Normal may be the most politically and historically charged of stations in the Metro system. Today, it’s the main station for students attending the nearby Santo Tomás campus of the National Polytechnic University (IPN).

But of course, the station logo represents the main tower of the even-closer National Teachers’ School building. Since 1987, it’s been called the Benemérita Escuela Nacional de Maestros (BENM). Prior to that, and since 1887, it was the Escuela Normal para Profesores de Instrucción Primaria. That is the Normal School for Primary Education Teachers. That’s the origin of the station name.

Unfortunately, the tower depicted was torn down in 1972 as it was leaning and no longer safe. It had already been reduced in height by three stories after the 1957 earthquake. It’s part of what is arguably the masterpiece of mid-century architect, Mario Pani.

But perhaps even worse, the demolition occurred only a year and some months after the tragic Corpus Christi Massacre of June 1971. The station had only opened for service in September of 1970. Within a year, almost 120 students, many from BENM and IPN were gunned down just outside the station. A plaque in the station commemorates the event as does visual art and written testimony.

In 2014, audiences across Mexico saw the name informally changed from Normal to Normalista. This was in support and sympathy for the Normal Student protestors from the Normal School in Ayotzinapa, disappeared in Iguala in the southern state of Guerrero.

Today, the station is very near what will be the newest of the Mexico City FARO art and cultural centers. It will be well located. It’s a major cultural thoroughfare on an already lively stretch of the old Mexico-Tacuba causeway. It’s also a major transit point for mini-buses leaving for points in Western Polanco.