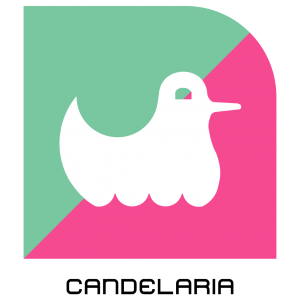 Metro Candelaria is on lines 1 y 4 of the Metro in the Venustiano Carranza alcaldía. It’s one of the most photographed Metro stations for the otherworldly interior designed by the architect Felx Candela. Dramatic umbrella-like parabolas lift from the columns, and hold up the roof. It’s the exotic look for which Candela is super famous, though it’s all based in geometry.

The name is from that of the colonia, Candelaria de los Patos. It was at one time a wetland on the edge of Lake Texcoco known for the number of waterfowl and migratory birds. This also explains the station’s logo. Candelaria, rather than the candelabra many English speakers perceive it to mean, is actually February 2, Candelmas. It’s the holy day commemorating the presentation of the Christ child in the temple.

Metro Candelaria is also home to the primary Lost and Found center for the entire Metro system. If you lose something in the Metro, however, it should be reported to the station chief of the station nearest to the loss.

The Office of Lost Objects (Oficina de Objetos Extraviados)
is in Metro Candelaria in the passageway between Lines 1 and 4.

One of Mexico City's most celebrated 20th century churches...

An otherworldly architectural ruin on the banks of the Zacapa Canal....

El Pañuelito is still a sight to behold in Mexico City's north.

Don't let the odd exterior throw you off. Inside it's a marvel of Felix Candela's famous soaring geometry.